The World Health Organization (WHO), announced, in 1990, that Auricular therapy is “probably the most developed and best documented, scientifically, of all the “micro-systems” of acupuncture and is the most practical and widely used.”

The WHO also recognizes Auricular therapy as a treatment option for over 100 conditions such as:

Who discovered ear acupuncture?
Dr. Nogier discovered that th ear is a ‘micro system” of the whole body. A micro system means that one small area on the body that represent the entire body. The word microsystem has also been referred to as a micro-acupuncture system or a micro-reflex system. The auricle serves as a microsystem in that the external ear is like a microcosm of the whole body, with one part of the body representing the whole body. This phrasing distinguishes a microsystem from the macro-acupuncture system of meridian channels that extend over the whole body and the nervous system connection of reflex pathways that inter-relate different parts of the body. Microsystems have been reported for foot reflexology, hand reflexology, face acupuncture, scalp acupuncture, and iridology. The term Microsystem was first popularized by the acupuncturist Ralph Alan Dale of Miami, Florida.

So there are no direct nerve connection between the ear and the body but the nerve from the ear connect to the reflex center of the brain . When needle are inserted in specific acu-point or stimulated on the ear the neurological reflex sends messages down to the spinal cord and then to the nerves that connect to the corresponding part of the body.

How does auriculotherapy affect pain conditions?
Most chronic pain is due to myofascial pain, related to the constriction of the connective tissue surrounding muscles in spasm. Muscles do not remain in spasm unless there are motor neurons causing them to contract. Maintenance of pathological muscles spasms is due to pathological brain reflex patterns that keep spinal reflex re-initiating the activation of the motor neurons that cause muscles to sustain their contraction. By stimulating ear reflex points that connect to the somatotopic reflex system in the brain, the pathological brain patterns can be electrically reset stop the unwanted activation of spinal reflexes. Pain sensations that are due to irritated nerves can be relieved by the normalizing of pathological, hypersensitive reflex pathways that interconnect the ear microsystem and the somatotopic brain. In addition to these neurological explanations, it is also theorized that pain relief from auriculotherapy is achieved by the hormonal release of endorphins into the blood. From a Traditional Oriental Medicine perspective, pain is due to the blockage of Qi (pronounced chee) energy in the acupuncture meridian channels, thus creating an imbalance in the macro-acupuncture system. By stimulating specific ear points in the auricular microsystem, bi-directional connections are activated in the body macrosystem which lead to a balancing of energy and an increase flow of Qi.

What is the role of Endorphins in Auriculotherapy?
The endorphins, endogenous morphine molecules that relieve pain in a manner similar to external opiate chemicals, have been used as one explanation for how auriculotherapy serves to relieve pain. Both animal research and human studies have shown that stimulation of ear acupuncture points appears to cause the systemic release of endorphins. Administration of the opiate antagonist naloxone partially blocks the analgesia produced by either auriculotherapy or by acupuncture.

Auriculotherapy may be the answer you’ve been looking for.

Traditional allopathic (Western) medicine looks to the ear as an organ that allows us to hear and helps with balance. Your outer ear however, has a much greater importance. It has a system of complicated nerve connections that allows for constant communication between the brain, ear and the body. When there is a problem , an imbalance in your body, our device can electrically detect it on the ear acupuncture points that correspond to the organs or tissue involved. By stimulating these acu-points we energetically trigger a natural healing response.

What is a treatment like?
This treatment can be added to a regular acupuncture treatment if needed. Traditional acupuncture involves inserting needles in acupoints throughout the body. Auricular points are only a few millimeters or less from each other and there are more acupoints on the ear then are on the body. Technology has enabled practitioners to utilize a device that can locate the acupoints with extreme precision. The device detects an increased or decreased electrical skin conductivity and when that happens, the point is said to be “active.” Not all points on the ear are active. They are only active if there is an issue with the corresponding organ or tissue. 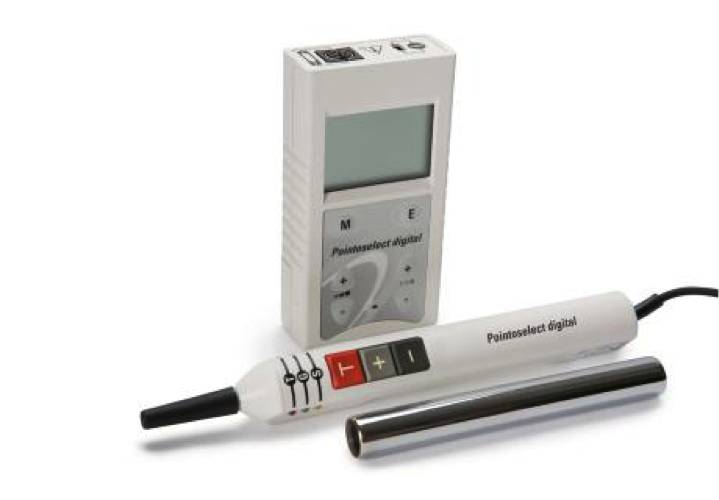 The most sophisticated devices also detect polarity of active points, which tells the doctor exactly what the body needs to address the issue. The practitioner must determine what frequency to treat the points at and there are 7 frequencies that Nogier developed. This skill is a critical component to success of the treatment.

Optimum Health Acupuncture utilizes a device used by over 20,000 MD’s in Germany. While the patient lies down on the table, we gently examine the ear to look for various signs such as discoloration, bumps, dryness, tenderness and more. We then use the device and place the probe against specific spots on the ear and see if the device picks up any imbalances. We treat active points between 7 seconds to 1 minutes each. The treatment is painfree. You may feel a slight tingling or prickling sensation but you should not feel pain.

How Fast are Results?
There is no way to determine how quickly you will feel results. Each person is very individual and has many factors including how long the problem has been present and the severity. Electro auricular therapy is meant to jumpstart your bodies natural healing abilities.

What are the contraindications for auriculotherapy?
As with other forms of acupuncture, there are few contraindications for the use of auriculotherapy. It is important not to treat any pain needed to diagnose an underlying problem, not to treat any pain needed to limit range of movement of an injured area of the body, not to treat women who are pregnant, and not to electrically stimulate the ear points of patients with a cardiac pace maker.

What are the side effects that occur from auriculotherapy?
Because tenderness of ear points is one of the primary diagnostic features of auriculotherapy, soreness on the ear points stimulated can sometimes continue for up to an hour after the treatment